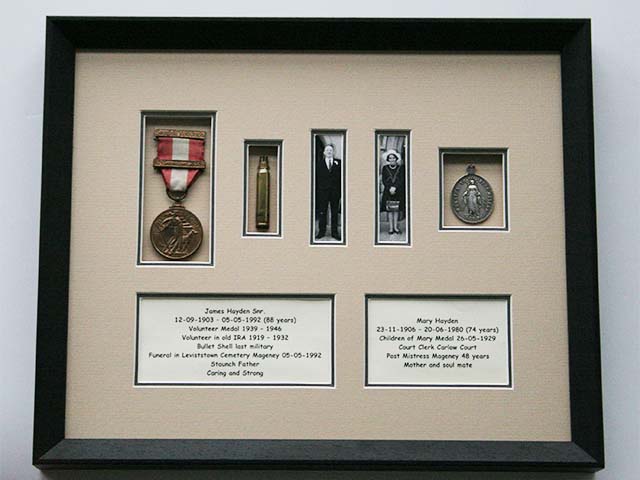 Our motto at Fine Framers is ‘Make Your Memories Last a Lifetime’. We can help you do that by creating beautiful bespoke framed displays of any type that you bring us, of great sentimental value or family significance.

We’ve recently completed another such project. This time, it was for a man who was spurred into action after watching the RTE TV series ‘National Treasures’. The series featured ordinary people showing extraordinary items they possess, and telling the stories behind them.

This man had some items that were collected by his parents several decades ago. They’d been put away in a box for far too many years, and he decided to do something to give them the home they deserve. He came to us with an interesting collection:

This was an interesting project for us, and one we were delighted to work on. We tried various lay-outs before the client chose the one he liked best, and we then got to work in earnest. As with all our medal framing and 3D object framing tasks, we used only the best materials and techniques, to ensure an attractive and long-lasting display in which all items are protected from moisture and other damage.

We also inserted a couple of inlay cards – one in tribute to the man’s father, and one for his mother. Overall, the result shows how we can create a beautiful display of substantial size from even a few small objects. Such a display can become a real talking point in your home, and a family heirloom for generations to come.

Contact Us to see what we can do for you

If you too would like us to frame memories to make them last a lifetime, just get in touch with us. We’ll look forward to hearing from you!