Yvonne & Karen invited to Party at Áras an Uachtaráin

On June 27th, President Michael D.  and Sabina Higgins  hosted a Garden Party at the   Áras an Uachtaráin  to celebrate Creative Arts and Craft. For them, the garden party season is a special time of the year when they welcome many citizens who have contributed in a special way through their talents, work and indeed genius to Irish society. 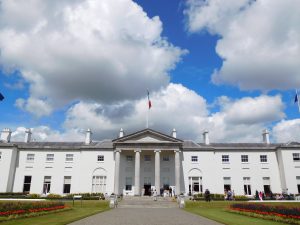 The theme of the presidents speech was  ;

“It is Culture that will save the economy, not the Economy that will make Culture possible”

He highlighted  “The work of innovative and imaginative Irish craftspeople is receiving wide acclaim on both the national and international stage, reminding us that Irish creativity and our country’s reputation as a world class source for quality and craftsmanship is something in which we all can celebrate and take pride. ”

and lamented the words of his dear friend Noel Browne,

“often saying to me – if every house had but one beautiful object – what a difference it would make, what a source of memory. ”

The Presidents speech at the Garden Party can be read here: President’s speech

To mark this great occasion and to show our appreciation, we presented President Michael D. Higgins with his first poem “The Prophets are Weeping” framed.

The President was influenced by the flight of people from northern Iraq and those in flight from the Syrian conflict. The poem reads: