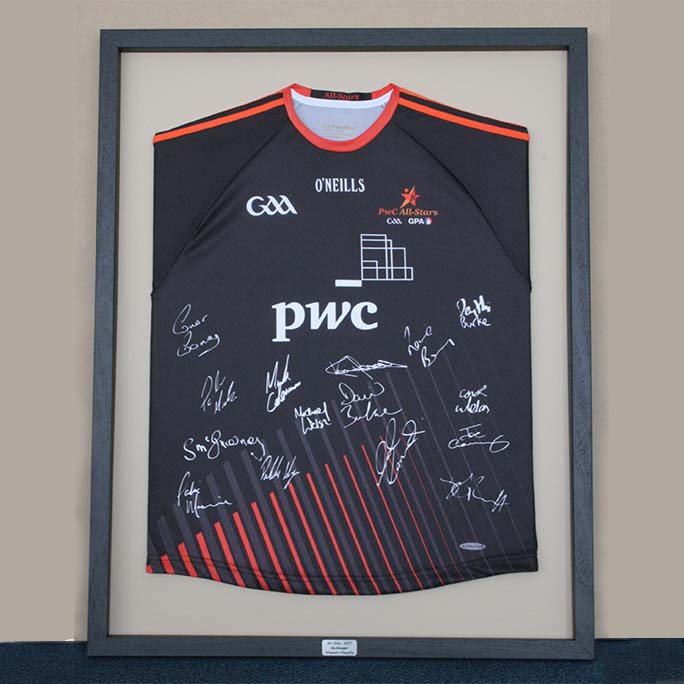 We’ve just completed a GAA jersey framing project for somebody who’s a real hurling star. In fact, he’s an All-Star, and what he brought us was his All-Star jersey.

The client was Stephen O’Keeffe of Waterford, who was goalkeeper for the Déise as they reached the All-Ireland Final of 2017, and who earned his first All-Star award for his performances. Stephen was rightly proud of his achievements, and had kept as a souvenir his All-Star goalkeeper jersey from the All-Star tour to Singapore, where a 2017 selection played against a 2016 team.

He had the jersey signed by a number of other hurling stars who also played there. These include Joe Canning, Conor Cooney, Gearóid McInerney and Daithí Burke (all Galway), his Waterford team-mate Michael ‘Brick’ Walsh, and Pádraic Maher of Tipperary. Overall, it makes a wonderful souvenir of a memorable time.

We were delighted to frame this jersey for Stephen. We gave it all the care and attention that all our jersey framing projects receive. This includes using conservation-quality mountboard and glazing to protect the jersey, to prevent fading or other damage over time.

We also added a metal plate to the frame, to identify the jersey. It simply states: ‘All Star 2017 – Goalkeeper – Stephen O’Keeffe.’

Stephen was delighted with what we delivered him, and this in turn delighted us too. We wish him all the best for the future. Maybe he’ll win another All-Star or two, and maybe…just maybe…Waterford might eventually win the All-Ireland they’ve wanted for so long!

We’re always delighted to frame GAA jerseys or other jerseys, whether for All-Stars or any other player or occasion.

We produce far better results than others can deliver, as all our framed jerseys are guaranteed not to sag or suffer other damage over time.

Just get in touch with us if you would like to know more, or have us do something for you.